Recently a little seven-year-old local boy named Ned, died of blood cancer. It was front-page news here. Our media had been following his case for the last two years as his parents tried all in their power to help save him, including a trip to the USA for an expensive, innovative treatment that gave hope. For a while.

I didn’t know the boy, but I did know his father when he was a child, having been friends with his parents, Ned’s grandparents. I never met his mother, Emily, a local GP, who blogged about their experiences, their ‘journey’. I did read her blog occasionally.

No doubt Ned was unknown to most of her readers and the local paper’s readers too, but that doesn’t mean we weren’t touched by their story and I’m grateful for her courage in sharing it. 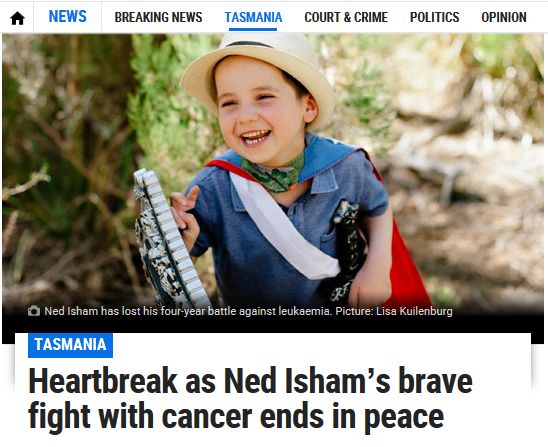 And for me at least, mixed with the feelings of sadness and compassion for the family is a sense of shame which I’ll entertain - for a while.

Shame on the medical profession for their failure to save the children. Shame on the drug companies for creating the most horrific of ‘medicines’ and calling it ‘therapy’. Shame on our government agencies for taking the easy way; following the mainstream in allowing only three options in the treatment of cancer – surgery, radiation and chemotherapy - when there are many proven complimentary options. (I hear there’s a fourth option emerging at last – immunotherapy – which is having better results in some cases, but I want to continue my rant!)

Shame on us all. We’ve allowed ourselves to be blindfolded for too long by our own fears and lack of self-worth; made ourselves subservient to the ones in the white coats with letters after their names, the ones in suits who stand behind the podiums and pulpits, the ones with the loudest voices and the biggest number of fans.

And shame on me for not sharing my light far and wide, not standing up for my view of the truth, my vision of where we could be headed. It’s a future

Another thing Ned’s ‘transition’ illuminated in me was that we really are connected. Some would say We Are One – a nice concept, but physically? Not a thing. But we can feel each other’s pain, joys and sadness whether we have a personal relationship or not, through storytelling and sharing.

Quantum physics tells us that once two sub-atomic particles are connected, they behave as if always connected even when separated by huge distances. They are ‘entangled.’ Isn’t that what happens with family, friends and acquaintances too? There’s no such state as an ex-partner, ex-lover or ex-anything where love is or was involved, because love doesn’t die, although, with our free choice, we can manage to ignore it.

I don’t want to ignore love any more, I’m ready to feel it and act on those feelings of compassion.