‘The New Normal’: it’s a phrase I first heard at Glen Huon Primary School in March last year as the cleaners embarked on their new routine, disinfecting all the computer keyboards, desks and chairs. My thought at that time was that it’s about time keyboards were wiped down daily, just as it would be very nice to see ATMs cleaned of dirt and fingerprints on the high street.

But the times we live in call for more than upgraded sanitizing habits, and there is no going back to the way things used to be if we take a broader view of the situation.

I believe we’re in the midst of a war. I don’t know when it started or when it will end, but I do see some big-time battles taking place, and while some of them seem remote to us and are indeed involving real bullets and actual fatalities, at least some of these war-fronts involve you and me: the war for our hearts and minds; for our attention, for our trust and obedience.

Speaking of attention, let’s look at a huge battleground: the info-war.

It was during the winter of 2020, the nightly news flooded with images and statistics of a pandemic, with the news reader backed by a graphic of a virus floating in a sea of grey goo, that we decided that enough was enough and turned off the TV news.

It had been our habit to watch the SBS World News at 6.30 then the local ABC News at 7. We like Janice Petersen – what’s not to like about her? And ABS’s Guy Stayner’s a good bloke too I’m sure. We like how he manages a cheeky quip and a grin at some stories.

The first person I turned to during the brief Tasmanian lockdown, was my old friend and teacher, Prem Rawat, who continued to broadcast his message of peace throughout the world’s long period of lockdown, isolation and social distancing. He then continued to tour and hold live events as well as livestreams, radio and TV interviews and podcasts.

I don’t know anyone who has been such a prolific and consistent ambassador for peace over the last fifty years than Prem.

Thanks to some of you, my good friends, I was introduced to doctors speaking out contrary to the mainstream approach to the pandemic. Among them was Dr. Zac Bush and Dr. Rashid Buttar, then came a group calling themselves America’s Frontline Doctors.

There are many others including Nurses, scientists and healthcare professionals. They are worth listening to because they are unafraid and can report honestly on their results in prevention and treatment of this and other diseases.

All of these brave professionals have suffered severe discrimination, censorship and abuse by the mainstream media and social media trolls for their views. They deserve our respect and support. 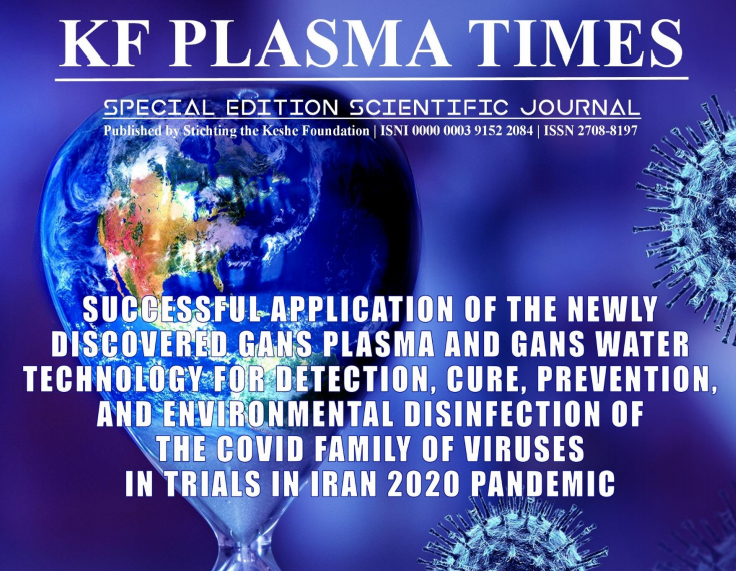 In June 2020, I read about the Keshe Foundation working with a city health authority in Iran to diagnose, treat and cure the new coronavirus. This information had been passed to the United States administration via their ambassador in Austria in June 2020.I have uploaded the entire 102-page document here.

The articles included detailed results of medical trials and instructions for making the GANS formulas which had been used. I made this information available to our local federal member, the independent Andrew Wilkie. We had a 40 minute conversation in his Hobart office in August, much of which centered around why it will be so difficult to get this information accepted by any mainstream politicians or health professionals. Despite this, Mr. Wilkie promised to send the information onto the federal health minister Greg Hunt.

The result: Australia was declared Covid-19 free by September…NOT!

Actually, the letter and documents were not even acknowledged let alone investigated as far as I’m aware, with the possible exception of Western Australia. However, the minister cannot claim ignorance and therefore must accept liability at some point.

Speaking of which, a group of Concerned Australian lawyers sent a Notice of Liability and Potential Claims to Victorian and Federal authorities in November 2020, a screenshot of their summary is included below. Click the image to be taken to their website which includes a huge list of supporting documentation under the Exhibits tab. 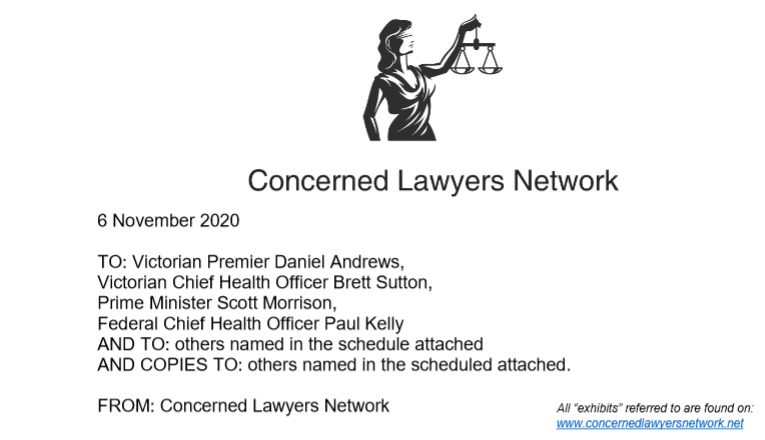 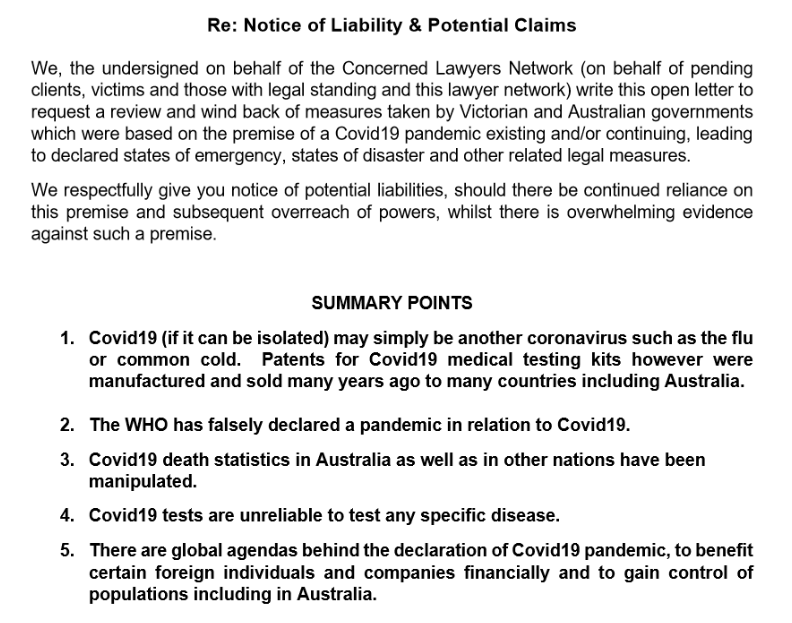 Andrew Wilkie has also been notified of this and I hope to sit down with him again soon.

With the US election in the constant news in 2020, we started looking for alternatives to the Mainstream media’s contemptuous presentation of the Trump presidency. Being a long-time left leaning voter here, this was new territory for me, but my intuition told me that ‘Orange Man’ couldn’t be as bad as the news grabs made him out to be.

Lee Carroll-Kryon had foretold us in 2015 that there would be a ‘wildcard’ in the 2016 US election, so when Trump swept in in November 2016, I was quite amused and interested.

David Wilcock had been one of my favorite authors for many years and he also pointed out the links between the Trump phenomenon and an Alliance of military and intelligence officers in the USA and world-wide opposing the Deep State.

Suffice to say, we’ve been very interested in the events since then and have found current events commentators such as Charlie Ward, Michael Jaco, Jeffrey Prather and Martin Geddes (this links to his new book, Open Your Mind to Change, A Guidebook to the Great Awakening).

If you like exploring rabbit holes, some of the above links will take you down there and beyond. Be prepared to rethink everything you know or think you know and remember we don’t know what we don’t know. Get used to being outside your comfort zone and adjusting your world view as a light shines into some very dark places, both in our own mind and in the actions of some of those we trusted, respected or voted for. 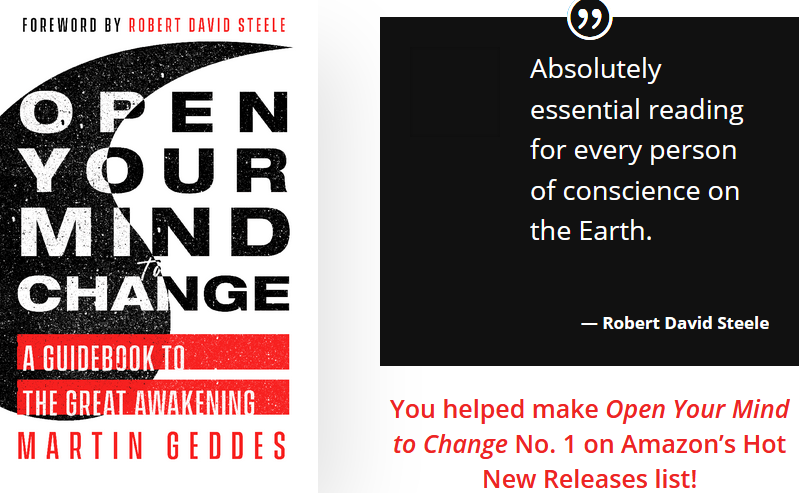 Some of the revelations to come will make us literally sick and confused for a while, but remember you and I have the power to love and to forgive, which means to send love even to those we fear or hate, those who have misled or abused us as well as those we hold near and dear. Compassion: that’s got to become the new normal.

I’m here if you want to talk, meet up or chat online. I like hearing your voice. Seeing you face-to-face is perfect. Coffee is a bonus.

One thing I do know is that we can heal and connect on a very pure and comforting level wherever you are and that we can find peace within ourselves too. For me, that’s a necessity.

In case you missed it here is a wonderful feedback thread from L. K. in Scotland after her Reconnective Healing.

Stay in the Love Vibration – at least most of the time! Enjoy the show outside while eating your popcorn and feeling the love inside.