My Scoliosis Story
(It has a hopeful ending)

The first treatment I remember was with a German masseur in Wagga, NSW named Mr. Geurtner. Each Friday my father would pick me up from school early and we’d drive the 50 miles from Culcairn to Wagga for the appointment. After massaging for a while Mr. Geurtner used an electrical device which he rubbed over my back. It made a sparkly crackle as it moved over my back. He then did some kind of chiropractic manipulation on my spine which moved it into a better alignment.

The best part was after each appointment dad and I went to the main street and bought a bag of hot cinnamon donuts. I’d never tasted anything so deliciously sweet!

This routine went on for some time while I was about ten years old, until eventually Mr. Geurtner had to admit that my spine was not “holding” between treatments.

So the next stop was to another therapist in Wagga who represented a treatment named PAX. I don’t know what that stood for, but I was met by a large, imposing but kind European lady whose treatment included putting me back-to-back with her, our arms linked, whereby she would bend forward raising me towards the ceiling then with a jerk and a crack my spine would stretch and straighten.

And again the treatment would not hold until the next appointment.

During this time, when I was aged from 5 to 11, I had no real back pain from my scoliosis, but the curvature was progressing steadily. At age ten to eleven, I was in the habit of standing on one leg or putting my left arm on my hip to balance myself. I was also much taller than my friends, as is typical of some scoliosis patients whose curve worsens during times of rapid growth.

It was in 1965, at age ten that my parents heard of a new surgical procedure for scoliosis that had recently arrived in Australia from the USA. There was one surgeon in Melbourne and one in Sydney doing this, so it was off to Melbourne on the old steam train for me and my dad. 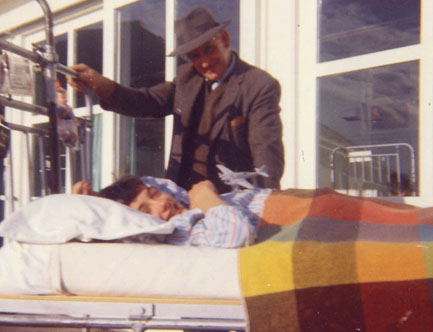 With my Dad after the scoliosis operation, 1966.

There I was seen by Mr. William Doig, who worked at the Royal Children’s Hospital. Bill Doig was – and is – a tall, thin and kindly man with a special ability to relate to children. I liked him from the start. Looking at my x-rays he explained the Harrington Rods operation which he would do once I’d reached the required stage of bone growth. Although scared of the prospect of an operation, I trusted Mr. Doig and my parents’ faith in him.

So I had to wait. This meant a year or two of regular visits to Melbourne and Mr. Doig’s consulting rooms in St. Kilda Rd, often with just my dad. This was a special experience for me as the middle child of five, to have so much time with my father alone in the big city in the mid sixties.

The six hour operation finally was performed on a cold foggy day in July, 1966 and was followed by over three months in hospital after which I had to relearn to walk. Then I was sent home with a plaster cast from under arms to hips during the summer. It was not pleasant when it was finally removed in January 1967 to be replaced for another six months by a steel and corseted brace. 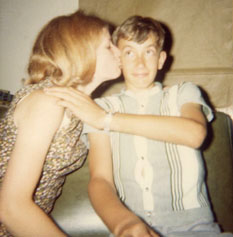 Four to six months after the scoliosis operation, this is me getting a kiss from my older sister. You can see the plaster cast bulging under my shirt.

Still, to this day I’ve had no more trouble with a regressive scoliosis…EXCEPT that whatever caused the problem in the first place continued to cause my spine to twist and turn in other vertebrae, causing lower back pain that was not dealt with until I came across Reconnective Healing.

I tell that part of my story here on the Child’s Play Healing Back Pain page.

Within a year of my operation, which involved a spinal fusion and the insertion of twin Harrington Rods either side of the spine from T13 to T17, I was able to carry on life almost as normal for a 12 year old.

Before long I was playing Australian Rules football, tennis and athletics and, apart from an embarrassing “hump” on my right rib cage caused by the twisting of the thoracic vertebrae, I had a pretty normal teenage life.

It wasn’t until my late twenties that back pain problems reappeared.

Continue from my scoliosis story to the Back Pain solutions page

Contact me for more information or a Reconnective Healing appointment