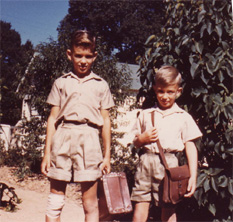 Ready for my first day of school with big brother Bill, c1959.

My first educational experience was Sunday School at the age of four. It was run by Mrs. Jean Kerle in the long wooden church hall that ran along one side of the Presbyterian Church in Culcairn, southern New South Wales.

As a kid, I hated the crowds of other kids, the absence of my mum and dad and my big brother and sister.

On one side of this room were arranged about 30 small square wooden chairs; their rigid backs to the wall. This is where we sat and sang:

Then we’d fold our hands in prayer and repeat after Mrs. Kerle (who was also the town Girl Guide leader and a close family friend):

“Gentle Jesus meek and mild, look upon the little child
Pity my simplicity; suffer me to come to thee.”

Hiding behind our hands with my friends Andrew, John and Colin we’d smirk and whisper and giggle at the words. We had no idea what “my simplicity” meant nor why we had to “suffer me.”

One thing that made it almost worthwhile was that we’d finally get to play in the sand tray with the little plastic animals. Even so, it took buckets of tears and quite a few Sundays before I was independent enough to not have to call on my big brother for comfort to get me through the interminably long session.

I just couldn’t understand why I was being left alone in there with all these strangers. Although mum and dad were just a few meters away in Church, they may as well have been in another town as far as I was concerned.

So with a few little rewards, a little kindness from Mrs. Kerle and others and the occasional jelly bean, I got used to it, and started to shift my focus to competing for the attention of the girls in the class, particularly Cynthia and Carol.

Then the threat of public school loomed.

“The kindergarten teacher has a big blue stick and she’ll use it on you if you talk,” big brother and sister warned me. That worked! I was terrified of school at least six months before I got there as a five year old.

Each year after that was really a repeat performance of that first experience in Sunday school: terror, separation anxiety then eventual acceptance.

With the help of my much more confident friends I learned to cope and even to succeed.

I got through kinder without copping the teacher’s wrath or her blue stick, but its presence on the blackboard (which really was black in those days) was a grim reminder of her power.

This didn’t stop us boys from being boys, mind you. We were about as naughty as we dared to be and often ended our playtime in the library line-up where the headmaster (principal) had us hold out a hand while he walked along the line and whacked each hand with the cane end of a feather duster!

This made your hand swell up so that you couldn’t hold a pencil for a while. Serious misdemeanors meant two “cuts,” one on each hand and the ultimate punishment was “six of the best.” As far as I can remember, that only happened in high school where we got caned on the bum, and I had the distinction, in grade nine, of holding the record number of punishments (canings) for that year.

So I hated school. But I did like some things there, including some of the teachers. I do remember, as little 5 to 6 year old boys, one of our tricks was to sit on the mat at story time and see if we could see up the teacher’s dress! I think teachers underestimate the sexuality of young children.

I loved learning too, and became quite good at the system, coming in the top 2 to 5 of the class, usually after my childhood sweetheart, Cynthia. I was conditioned to think this was a good thing.

But I hated that others weren’t so successful. My friend Barry always put himself down, calling himself the dumb one. Today he has his own business and owns a fair bit of what was our family farm.

If I was left to choose my own learning I’d have chosen, at various stages, trains, firemen, sailing ships and pirates, guns and cannons, The Famous Five, horses, Egypt, Aborigines and archaeology.

More and more, as I progressed through school I learned cynicism and sarcasm. There was a misfit between what I had to learn and what I considered relevant or interesting.

At the same time I was swinging between going along with the system – success – and hating it – cynicism.

The misfit first came to a head in my last year of high school – grade 12 at college these days.

The boys’ school I attended for four years amalgamated with its sister school, becoming co-educational in 1972. Girls!

Everyone had to try this girlfriend experience. By late that year my friends and I published the school’s first underground newspaper, titled “IF.”

We thought it was so outrageous, but, on reading it recently, I was more embarrassed by how little we had to say. After more than 12 years of schooling we were too much a part of the system to really see its effects on us.

That's when my unschooling began, and it'll never cease!

Go from school stories to the Reconnective Healing Blog

Contact me to talk about your own unschooling story!